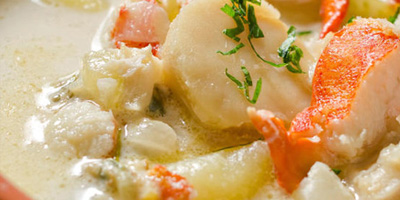 Ian Watson emerged the winner at the 4th Cullen Skink World Championships, beating off the strongest field of contestants yet.

Simon Tucker, Vice-Chair of the Cullen Voluntary Tourist Initiative, commented:-   “The 4th Cullen Skink World Championships have proven to be the best yet.  We had the biggest and strongest field of entrants; the coverage we enjoyed in the press and on the radio in the run-up to the Championships was incredible; and we are so grateful to all those who supported us both before and during the competition.  Even the inclement weather immediately before the event did not succeed in putting a spanner in the works; and on the day, spectators and contestants alike were able to enjoy stunning views of Cullen Bay in sunshine.”

Ian Watson of the Cullen Bay Hotel beat all contenders to lift the Traditional Cullen Skink World Championship, adding this to his With A Twist victory in 2014.

The judges – Louie Paterson of Cluny Fish Buckie, Alistair Fowlie of Moray College and Scott Armstrong of VisitScotland – certainly had their work cut out and faced a very difficult task in choosing the winners.  Tension rose for the Traditional Cullen Skink decision, with the judges spending an hour tasting and retasting the 10 entries – with a number of criteria to judge – consistency, colour, flavour, texture, aroma and presentation.  No easy task.  With no benchmark for comparison, the 5 entries for the With a Twist competition proved just as difficult – with all 5 producing their very own versions of the classic dish.  The judges commented after the event that they were hugely impressed with the quality of all the dishes – presenting traditional Scottish food at its very best.

Simon Tucker added:  “We have to thank so many people for ensuring that yet again the World Championships were a success – Cullen Bay Hotel for hosting the event in such a stunning location; the press for supporting us so well in their coverage of the event; Mountain Warehouse for rescuing us from a very tricky situation when some of the cookers were damaged in delivery; Johnstons of Elgin for donating a Merino Wool Throw which raised valuable funds for the Cullen Voluntary Tourist Initiative; the spectators who came to encourage and taste the dishes; and of course, all the contestants who invested so much in time, endeavour and imagination to make this the best championships yet.”